In the early aftermath of the botched app for collecting Democratic Presidential Caucus results, the New York Times had this excellent breakdown of what went wrong with the Iowa Democratic Party's foray into technology.

The structure of how this came to be matters. A simplified version: Democrat politicos founded (and funded) a “non-profit” designed to provide a digital edge in 2020. These political consultants, mostly former Clinton campaign operatives, funded a series of efforts and companies. One company, after some failure and a name change, called itself “Shadow.” Sporting a few employees, failed projects, and no track record, but this very important “non-profit” funder, Shadow collected contracts from all of the bigs: Biden, Buttigieg, and the Iowa Democrats. It appears that after discovering Shadow was vaporware, the campaigns cut bait. The party stayed, spending $65k for a caucus results collecting app.

The rest, as they say, is history.

The Iowa Caucus app is yet another example of why the political industrial complex doesn’t achieve good results with new technology. It takes patience, careful and consistent improvement, and big investments in user training and support to deploy winning technology. The political industry’s structure favors impatience, big launches, and insiders--it’s enterprise, not SaaS.

Look at the structure the political consultants used to fund this project. Donors put untraceable cash into a “non-profit” (a collection of separate legal entities). The consultants on the board and payroll of these entities then get to select which of their friends receive contracts. The donors think they’re buying results: a tech edge, digital ads to fight Trump’s, and whatever else. But what the donors actually create is a group of campaign consultants who can independently fund their own pet projects.

It’s surprising, given the huge funding these groups have, that the firm eventually using donor money to do work usually a few former interns making chump change. (Look at the times piece: Shadow had few employees and no engineering experience.) Why? The actual workers are the last people in a long line of advisors and consultants, each taking a slice of the cash as it funnels along. Given the interconnected sets of entities, boards, investors, and contracts in the Acronym -> Shadow -> IA Democratic Party chain, it’s likely each consultant skims a commission or retainer off their slice of pie as it gets passed around.

A donor probably was asked to give $250k to pay for caucus infrastructure, but splitting that between a national group, local consultant, and technology firm, a paltry $65k is leftover for doing the work itself.

Who’s to blame? Shadow will likely be folded, some consultants and operatives may get an angry phone call, but they’ll all end up collecting more cash for their next scheme. The non-profit that created the company “removed a mention of its role in developing the app from its website.” (from the Times piece.) With a structure this convoluted, everyone has plausible deniability.

Update: the day after I wrote this post, my Gmail inbox gave me this bit of serendipity. Both organizations are hiring. You can join the failure in real time! 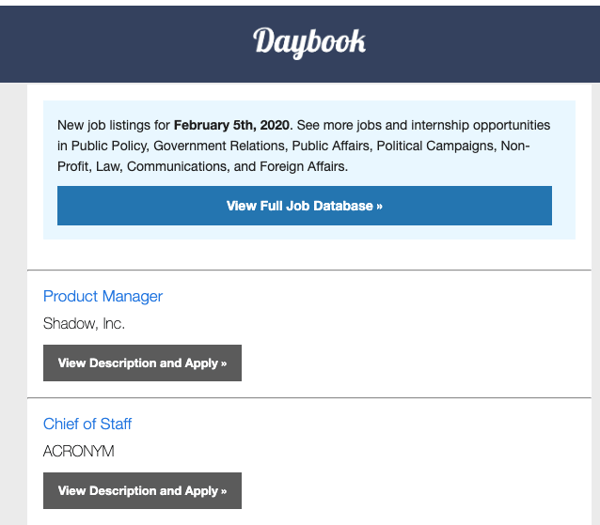 Technology is Hard to Execute Well: Political Vendors Are Set Up to Fail

Anyone who’s seen Scott Brinker’s map of marketing technology firms knows that it doesn’t take much to spin up an application. In theory, it shouldn’t be hard to get a few thousand precinct captains and ninety-nine county leaders to log-in to a screen and post their numbers. After all, this is simply automating the old system of calling Party HQ with a few numbers!

But there’s a difference between the technological equivalent of building a Google Form and getting people to actually do something in crunch time. Want to see how your app works? Look at what people do when they need to hit a monthly quota or report results to the boss. Are they on your app or in Excel? Your mobile experience or a post-it note? There’s a big difference between making an app and ensuring that it’s used properly. The difference is all about the details.

On Monday night, people were tweeting photos of printed instructions on navigating around your phone’s security features to hack install a non-approved mobile app. Those instructions probably worked, if you could follow them. After a failure of tech, which a few weeks of app store approvals would’ve gotten around, the failure here seems more like training and support. Who shows up to “game day” without the app installed? Where was training in the $65k budget? Where’s the support line for a few thousand users simultaneously getting stuck? I’d bet no one.

“Shadow” had a handful of coders, they were funded by a vague non-profit with more than its share of political consultants. Who actually had launched a tool? Who built a support team? How many of them even onboarded an organization onto any piece of technology? I’d bet none of them.

It’s hard to launch technology well. It’s even harder if you don’t plan to launch it at all.