Jonah Goldberg has a great podcast. It’s a great reflection of the traditionally conservative but Trump-skeptical. He’s a center-right pundit who’s maintained some sense of true north and a modicum of straight talk amidst the recent turbulence. That’s rare. Now he’s launching, along with two partners, a media company called The Dispatch.

The Dispatch’s opening manifesto has a lot to like. They’re jettisoning the junk associated with conservative political websites: stale breaking news, clickbait headlines, comments, popup ads, autoplay videos, and those incredibly irritating bikini and junk medicine “links” at the bottom of every article. Decent writing combined with less crap is a winning formula for me. Will it win more generally?

For a long time, political websites have tried to be mid-century newspapers: a giant bundle of topics, formats, and bylines, aimed at building a huge audience to sell ads against. That model, if it ever worked, certainly doesn’t work now. Aside from perhaps USA Today, the Times, and WSJ--the national media--the giant audience model won’t work in the future. What’s left? More importantly, how can you swing a profit with journalism?

To make money at journalism, you need to build a large, loyal audience (solve the discovery challenge) and creatively turn their loyalty into revenue (solve the monetization challenge) in such a way that you don’t burn the audience’s original loyalty. Put another way, you need a robust digital marketing strategy.

Solving those two challenges--discovery and monetization--takes some strategic insight. Digital marketing channels can be evaluated on a discover-ability axis and a monetization axis: on the first you're aiming to build an audience, on the second you're aiming to earn money from it. 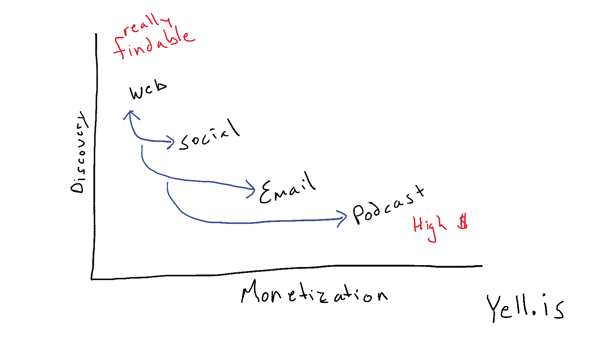 Here’s how that applies to the most common digital channels:

The Ringer’s Revenue via Podcast Strategy

Bill Simmons’s The Ringer does just that. They run a sport-oriented website and podcast network. It’s model: the free, good writing (and Twitter scoops) builds an active audience which they monetize with podcast ads. The pageviews and social reach stats aren’t the bottom line, they’re the top line. They rather a lesser set of pageviews with more of them converting to podcast subscribers--the latter is where the money is. As the WSJ reported:

The Los Angeles-based company, whose head count will reach 100 this year, doesn’t disclose detailed financials, like most startups. Its podcast ad sales exceeded $15 million in 2018, according to people familiar with the matter. Mr. Simmons says the company is profitable.

The Ringer has a growing roster of talented writers producing a wide set of content. Their videos, social, and articles cast a wide net, and the podcasts (endless podcasts) monetize the audience. 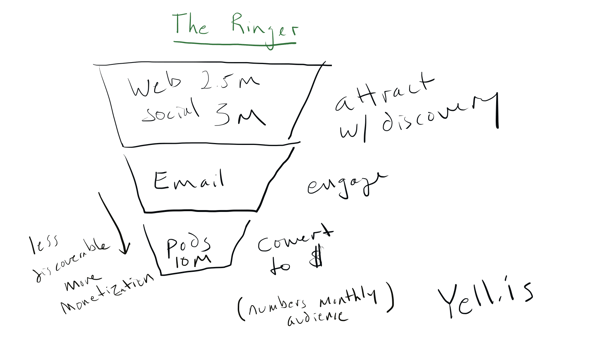 It’s got the makings of a flywheel, especially with many of their podcasts reaching the Apple top podcasts lists in the sports and entertainment sections. More downloads leads to more Twitter and article reading, leads to wider sharing and a growing audience, which leads to more downloads. And podcasts downloads are money.

The Dispatch’s Everything Via Podcast Strategy

Back to Goldberg & co. at The Dispatch. From their manifesto and early marketing, it appears they plan to publish a variety of email newsletters, which may also exist on a website, and record many podcasts. In the key difference, though, their intention is to put much of the writing and most of the emails (all?) behind a paywall. One will fork over cash to see the writing. The podcasts, on the other hand, will remain ad-supported and thus free to download.

While those pesky politicos live on email and doubtless the dispatchers will convert the people who already know and like them to paying subscribers, but how will the audience grow? 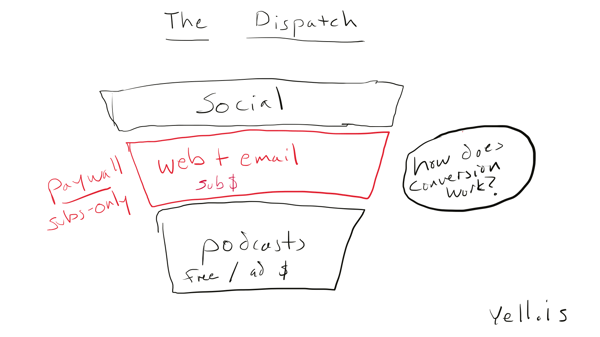 Podcasts are most discoverable when paired with another channel. I’ll bet any Dispatch email, online article, or author Twitter page will shill the latest free episode and feature a big old subscribe button. This helps take a reading audience and make them listeners.

The Dispatch may need something searchable and social-able to build its audience, which may be tricky with a clickbait-free , #coldtakes approach to journalism. Don’t get me wrong: I love their approach to what needs to be written, and I’ll be a reader. If I were them, I’d be worried about the funnel. Sure subscription journalism is the way to make money and sure ad-driven podcasts are profitable (for now), but they’ll need something to attract people. In the end, likely more things than they think will be available for free, online.

Podcasts as a technology are plagued with a huge discoverability problem: it takes social and searchable content to build an audience that will subscribe to your podcast.

Here’s my strategy for podcasts in the context of other marketing channels: 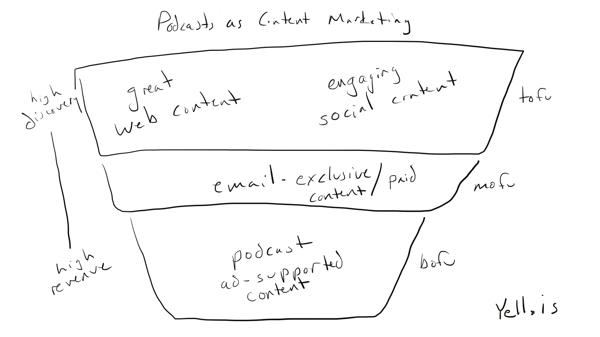 Podcasts are a great way to nurture a loyal audience and create revenue. But it’s tough to start with that. The audience needs to come from somewhere. Unless your podcast (or its publisher) are already on the Apple top charts, it’s near-impossible to get there: that’s why we’re incessantly asked to rate and review.

Discoverability may be helped by Google’s updates to include podcasts in search. It began indexing and serving relevant podcast episodes within search results earlier in 2019. There are still issues here: after an episode is in search, getting it to one’s preferred player or saved for later is still tricky. But having things things more “findable” is a good first step.