It was a big launch meeting: here’s the new CRM! My pitch was polished; the screenshots and demos were airtight. We gathered in the conference room, but then the whole thing landed with a thud.

When I’d finished the first part of the presentation and was about to switch into the demo, the first question was, “do we have to use this?” Followed up with a senior partner musing, “yeah, why do we even need a CRM?”

We hadn't even launched, and the CRM implementation was about to fail.

After a few weeks, it was clear: while the technology we picked was fine, it wasn’t going to be used by everyone, which, for CRM, made it useless for anyone.

This wasn’t the launch to our CRM implementation that I had expected. How could a sales team function without a CRM? Where did I go wrong?

It started from the top: the owner of the small agency where I lead the accounts team asked me to look at CRM tools. He’d heard a few testimonials from other business owners, and some of them had seen sales growth driven by CRM: more leads followed up with, more cross-sell and upsell opportunities. A lot of the tools his peers had mentioned paid for themselves in a few short months.

That we didn’t have a CRM, or any shared database outside of the company’s Quickbooks, had always struck me as a missed opportunity, so off I went: what was the right CRM for us? I did a thorough review: what did we have in place, what did we need, and what was the easiest and cheapest tool to get us there. The review was thorough: I and one of my colleagues demoed a few tools, even integrating them into our workflows and other systems, just to make sure things worked as-promised.

After testing six systems (including HubSpot’s Sidekick), we narrowed to two and presented the options to the boss. We selected Cloze CRM: it was simple, cheap, and integrated to make data entry easy: it even would grab our AT&T phone data.

The decision was fully baked, and we were ready to present it to the team. Here’s a sample of the leave-behind from that meeting:

Notice that in the “why” section of that document, most of the reasoning was really about “how” the software would work. That’s why the launch went so poorly.

Adoption is the Challenge for CRM Implementation

In any sales team, there are going to be some early adopters and some laggards. Not everyone will follow a process, even if it’s the best possible process. As a COO friend of mine says, "it’s more stick than carrot" getting people to adopt new systems, even if they are better for everyone. The process and system can be great on paper, but adoption is the challenge.

When the Cloze CRM project launched, the adoption challenge stared at me in the face and said, basically, I’m not going to do that. None of the prep of our process or the selection of our CRM had prepared the team to adopt it. I should’ve started elsewhere.

My launch started with the 6th stage of change management: it made CRM easy to use. There was no sense of urgency, coalition, or vision. 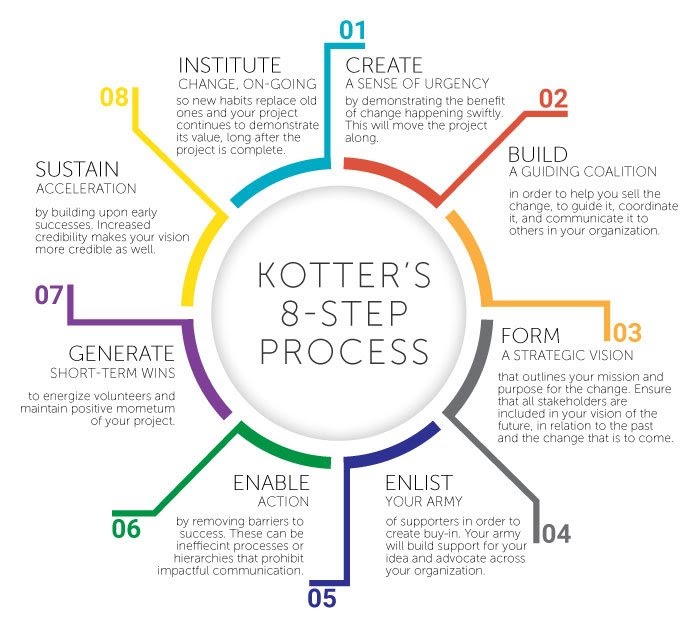 The project would’ve been better off if we’d spent months creating a sense of urgency amongst the senior sales people, and then building a tech-savvy coalition to find a solution. Instead, I holed up in a room to find a solution to a problem no one had identified.

Not long after that experience, I joined HubSpot. Now I advise our customers on how to manage their own CRM launches: they’ve already selected the technology, how do they get their teams to adopt it? The lessons I learned from my failed launch are useful:

Note that almost none of these are about technology selection. That’s a key driver in why the best selection processes don’t yield adoption: the best solution needs people to adopt it. The tech is the easy part, it’s people that are hard--because they actually create the value by doing the work.